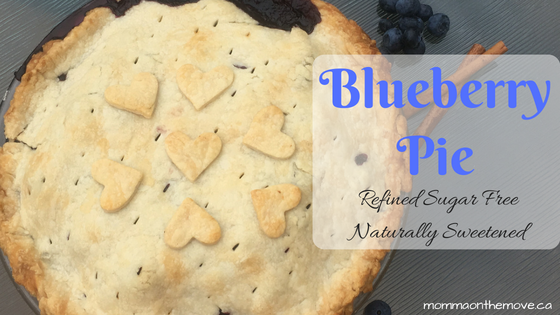 Fresh blueberries are a popular summer treat. Those succulent little juicy berries are delicious and nutritious with many health benefits. Blueberries are one of the richest food source of Anthocyanins, a plant compound which gives it it’s blue color and it’s many health benefits. They have been shown to benefit heart health, bone strength, mental health, cancer, healthy blood pressure and are extremely high in antioxidants. Who knew these little blue berries could pack such a punch?

I often buy copious amounts of blueberries in the summer and do all kinds of things with them. From simply eating them straight to freezing them for later, to muffins and smoothie combinations. One of the things that I hadn’t done for a while though was to make a blueberry pie. I have no idea why, as I make all other kinds of pies in the summer like cherry and peach. I guess I somehow had it in my head that I should freeze them all and that they were too small to make a pie out of. (This could relate to the many summers my sisters and I would go up to the blueberry patch on the barrens to pick blueberries – with intentions of picking enough to make a pie. It took us hours to get the amount we needed and sometimes we were not able to get enough).

But this year, when I did my regular purchase of fresh Okanagan fruit I decided that I needed blueberries as well and was definitely going to make a sugar free blueberry pie! (In fact, I even went back to the fruit stand before we left Oliver to get the blueberries as I had not purchased them the day before when I got the peaches and cherries). 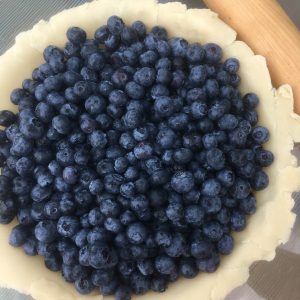 Of course, I had to create a recipe that was sugar free, which by now has become fairly easy to do after many years of being sugar free and using natural sweeteners. Honey is my favorite sweetener due to its many health benefits and being one of the more natural sweeteners (things like stevia and agave nectar are still processed and under controversy as to whether or not they are any better than using refined sugar).

I played a little bit, taking a bit of this and that from a few recipes and then combining and modifying ingredients to make my own. I even got a little fancy with the crust by creating a full top and then adding small shaped hearts on top (believe me I do not always have the time or the desire to do this).

The kids of course waited in anticipation as the pie baked. Turning on the light in the oven to check on it and see if it was ready. Chloe even remarked on the little hearts and thought that was a good idea (she likes to create other shapes and treats with the leftover pastry – you know the pieces that are left over but are too small to really do much with, but you hate to throw out?)

Once the pie was ready and we let it cool – well enough to cut anyway – we dove in! I had forgotten how much I enjoyed blueberry pie and also how much easier it is to make than other pies like cherry and peach where you have to chop and pit the fruit first. Blueberries you just wash and pour them in.

Unfortunately we didn’t have any ice cream on hand (but decided not to wait to get that organized) and fully enjoyed it anyways! In fact, the kids asked hopefully if they could have a piece for breakfast. I said I’d think about it… 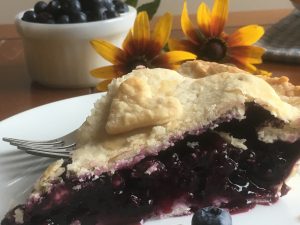 Prepare pie crust – whether you are making your own or have purchased pre made. If you have made your own roll out crust and fit to bottom of pie plate. Crust should cover the bottom and up the sides and over the edges slightly.

Roll out second pie crust to cover the blueberries and to the edges of the crust. Leave enough so that you can press the crusts together and crimp the edges. If using pre made crust, place and fit crust over fruit similarly.

With a knife make small slits in top of crust – this is to allow for air and for juices to bubble. Place in a pre heated 425 F oven and bake for 10 minutes. After 10 minutes reduce heat to 375 F and bake for another 40 – 45 minutes until crust is golden brown.

Remove from oven and let cool. *Note you can cut pie while still warm but it will not have set and will likely have juices running out. Let cool completely if you’d like it set and to avoid this. 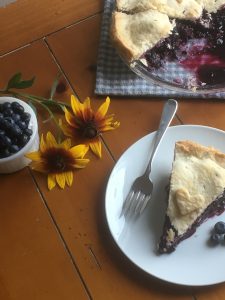